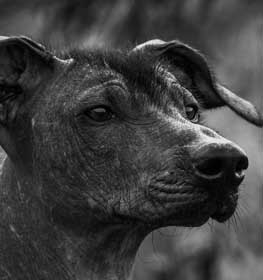 Collection of all the general dog breed info about Xoloitzcuintli so you can get to know the breed more.

Xoloitzcuintli As a Working Dog

The Xoloitzcuintli, or in their other name, the Mexican Hairless Dog is considered to be a naturally developed breed, most likely the result of a spontaneous genetic mutation. As their more casual name suggests, the breed finds its origins in Mexico, dating back a minimum of 3,000 years. Their conventional name is derived from the Aztec dog-headed god named Xolotl and from the Aztec word "itzcuintli", which translates to the dog. According to Aztec mythology, the breed was believed to be sacred by the gods, and the dogs were often sacrificed and buried alongside their owners, in order to serve them as protective guides in the afterlife. Moreover, the dogs were thought to possess healing powers, which were especially effective in cases of insomnia, rheumatism, and asthma.

For centuries the breed developed naturally without any interference by humans, with natural selection. The first mentions of the Xoloitzcuintli can be found in the travel journals of Columbus and other European discoverers. Later, archaeological evidence in form of representations on pottery, other artworks, and skeletons proved that the breed arrived in America over 3,000 years ago, with migratory humans. In the 16th century, Conquistadors documented and reported that they were being served dog meat at banquets, so it is presumable that the Xoloitzcuintli was also served nutritional needs. Later, at the beginning of the 1880s, the breed got a huge popularity boost, thanks to the recognition the AKC (American Kennel Club) gave them. At that time, the kennel registered the breed under the name, Mexican Hairless. The first specimen recognized by the AKC was named Mee Too.

After the Xoloitzcuintli’s popularity peaked at the beginning of the 1900s, the breed stepped out of the spotlight. However, in 1940, a dog named Chinito Jr. became the first of its breed, to earn an AKC Championship. Their popularity skyrocketed again after that competition. The breed was even portrayed next to Frida Khalo and also alongside Diego Rivera, who owned a specimen of the breed named Mr. Xoloti. Interestingly, over the course of the 20th century, the Xoloitzcuintli had gone through periods of insane popularity and periods when it was thought to be on the brink of extinction. Surprisingly, in 1959 the AKC de-registered the breed, due to the lack of interest around the breed. The breed might have gone to extinction, nevertheless, fortunately, the breed’s fanciers had brought it back from being endangered.

The AKC recognized the Xoloitzcuintli again in 2011. Today, the breed is considered a national treasure in its native country, Mexico. Moreover, the dogs were named breed of the year in 2010. Nowadays, the breed’s population number is approximately 30,000 worldwide, which makes them reside in the intersection of popularity and rarity. In sum, over the course of history, the Xoloitzcuintli had a very interesting and exciting life, and it served several very different rules throughout its whole existence including the source of food, healer, and hunter. Nowadays, the breed is mostly kept as a companion.

How old is my Xoloitzcuintli in human years?