How old is my dog in human age? What is the real age of your dog breed? Calculate dog years to human years!

How to use the dog years calculator? Select a breed, enter your dog’s age, click on the calculate.

DESCRIPTION OF THE DOG YEARS TO HUMAN YEARS CALCULATOR

WHO DOESN'T WANT TO KNOW THEIR DOG'S HUMAN AGE?

Dogs live much shorter than humans, unfortunately. However, there are also significant differences between dog breeds. Several factors are influencing and have to be taken into account if we would like to forecast a dog’s age. Generally, a large dog lives shorter than a small dog. Although, there are cultured breeds that live for a very short time due to their physical structure.

Such kind is a small French bulldog or a large Neapolitan mastiff. We also know that the development of a dog is much faster than humans, practically a 1 year in dog ages equals 14-18 years old in human years. 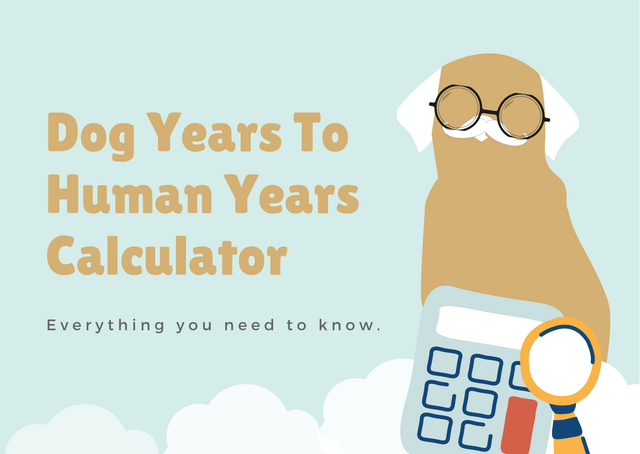 HOW CAN WE DETERMINE A DOG’S AGE IN HUMAN YEARS?

AND IF WE WANT TO ADOPT THEM IN THEIR ADULT YEARS?

Unfortunately, elderly dogs are more susceptible to diseases, especially the spinal problems that cause the greatest concern, which can primarily lead to the paralysis of the hind legs. As we feed our dog in his puppyhood with special meals, let's do this even in his older age. Vitamin-rich pet foods designed for old dogs can prolong the dog's age. The dog size significantly determines the highest expected age.

People tried to convert dog years to human years and tried to figure out dog age calculator methods since the 13. century. A record of the Westminster Abbey from 1268 shows that dogs age 9 years in 1 calendar year, so 9 times faster than a human. There is no scientific proof or reality in this data, although the age of dogs must have been multiplied if we want to calculate how old they would be as people.

There are several dog age calculator methods existing to forecast your dog’s maximum age. It is also often heard that the dog age is relatively easy to calculate, just multiply by 7 the number of “human years” they have lived, and we already know how old our dog would be as people. This is a common myth, but it is not even close to reality, mostly because not every year is worth the same as opposed to this dog age calculator method supposes.

Truth is that dogs really age faster than us, but their aging process is a bit different. They don’t even live for 80 years, but the calculation is more complicated than simple multiplication. Humans and dogs have some crucial connections but also differences as well in their epigenetic clock data.

While age-related DNA methylation changes in dogs implicate similar gene ontology categories as in humans, and other mammals there are also some crucial differences in their aging processes. Trey Ideker at the University of California, San Diego, and his colleagues performed a genetic analysis of dogs and humans studying the changes in their DNA methylation.

The research team of the University of California, San Diego discovered that compared with humans, dogs age faster at first, blazing into the equivalent of human middle age after only a few years. But this aging slows down: in the next 10 years, there is only about 20 human years’ worth of changes that will occur.

Dogs become mature in their first year, while people at the age of 14-15. There is no other such rapid development or aging, so the next few years cannot be counted as 15.

Popular belief in real life would mean that the age of a 2 years old dog equals a 14 years old kid. At the age of 10, the dog would be 70 years old. This can’t be 100% true. Instead of multiplication, we have to check the dog’s weight, breed, and health status. In reality, the average first 2 years of a dog equals 24 human years usually.

With many dog breeds, the first year equals 14-15 human years, and then it depends on the size, weight, breed, and health. Small dogs live longer and mature sooner than large ones, so their first year should be counted more, and then from the second year less. 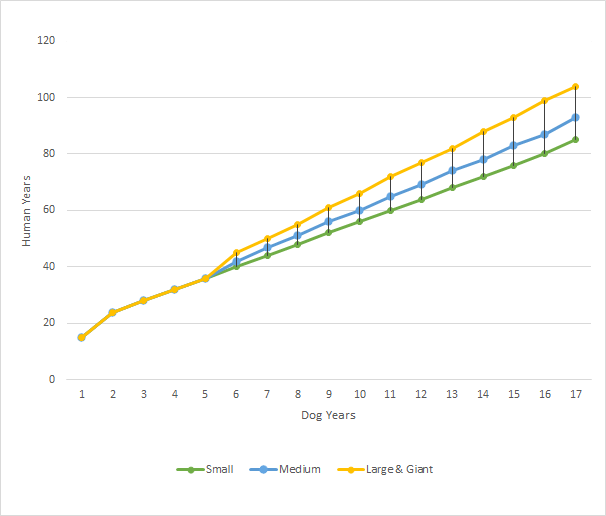 SUMMARY OF THE DOG YEARS CALCULATOR

Small and medium-size dogs age slower than large and giant size dogs. This means that a 10 years old Pug equals 56 years old human, although a 10 years old Great Dane would be 66 years old in human age. Cross and Mix breeds tend to live longer than purebreds, because of their wide genetical spectrum they are more resistant to diseases. So, how old is my dog in human years? Convert your dog’s age in human years now.

However, as I already mentioned the lifespan of your dog depends on several factors such as food habits and care, genetics play a crucial role. While some animals are prone to contracting breed-specific diseases and conditions other breeds are genetically tuned to live longer so the maximum of a dog’s age can highly depend on its breed.

The first breed on the list; the New Guinea Singing Dog is considered to be the rarest dog breed in the world. These dogs are native to Papua New Guinea and there are only about 100 of them estimated in the world.

According to Guinness World Records, Bluey, who lived 29 years, 5 months (approx.151 in” human years”) is the oldest dog in the world ever verified. Bluey was an Australian cattle dog owned by Les and Esma Hall of Rochester, from Victoria, Australia. She was born on 7 June 1910 and lived until 14 November 1939. A few years after Chilla, a Labrador Retriever and Australian Cattle Dog mix was reported to have lived to the age of 32 years and 12 days(this data wasn’t officially verified). These two dogs raised the question of the breed might have exceptional longevity.

A study began to examine the possible longevity of the Australian Cattle Dog. The study concluded, based on a survey of 100 dogs of the breed that while the Australian Cattle Dogs do live about a year longer than most dogs of other breeds in the same weight class on average, Bluey and Chilla are peculiar exceptions rather than proofs of common longevity for this entire breed.

We well know by now, that a dog’s lifespan depends on its size and specific breed a lot, but there are some factors you can control that may increase it. With simple habits and effective medical care, you can boost your dog’s immunity and keep diseases away. Of course once in a lifetime death is inevitable for all of us, including our four-legged best friends as well, but you can do your part to ensure your dog remains active and healthy for as long as possible by being aware and taking care of these few factors, I’ll just list:

Q: How can I calculate the age of my dog in human years?

A: According to the American Veterinary Medical Association, the calculation of the age of a dog differentiates between the different breeds’ sizes. However, one uniform calculation method can be used to guess the dog’s age converted into human years. The dog’s first year after birth, equals 15 human years, then the second year equals about 9 human years, and after that, every year can account for about 5 human years.

Q: Where can I find a calculator for dog life expectancy in human years?

A: On the page of AKC (American Kennel Club) or on the site of the American Veterinary Medical Association. It is also possible to calculate it by a simple method. The dog’s first year after birth equals 15 human years, then the second year equals about 9 human years, and after that, every year can account for about 5 human years.

Q: Where can I find a chart for dog life expectancy in human years?

A: Here or on the page of AKC (American Kennel Club) or on the site of the American Veterinary Medical Association.

Q: What is the average dog life expectancy converted into human years?

A: The average expected lifespan converted into human years is between 50 and 80 years, which would mean that the dog reached 12-16 years. However, this number depends greatly on the breed.

Q: Are all dog years are counted as seven human years?

A: According to the so-called “rule of paw” one human year equals seven dog years. However, as several scientists studied the ages of dogs, they came to the conclusion that there is no such rule. In fact, the calculation differs from breed to breed depending on the dog’s size. A new calculation method for computing the dog’s age converted in human years, is that the dog’s first year equals 15 human years, then the second year equals about 9 human years, and after that, every year can account for about 5 human years.

Q: How much do dogs age in their first year converted to human years?

Q: Do dogs have the same life stages as humans do?

A: Yes, dogs also go through different life stages during their lives. Puppyhood would account for infancy, toddler years, and early childhood. This phase lasts from birth until 6 months. Then, dogs reach the adolescent stage which would be adolescence for humans too. The adolescent stage lasts between 18-30 months. The adulthood in a dog’s life cycle begins at about 24 months up to 36 months depending on the breed. This life stage would be adulthood and middle age for humans. Then comes the senior stage, which bears many similarities to the human senior life stage. A dog’s golden years will begin between the age of 7 and 10 depending on the breed. Dogs also tend to get grey-ish coats, they slow down and sleep more.