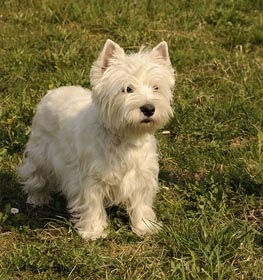 Collection of all the general dog breed info about West Highland White Terrier so you can get to know the breed more. 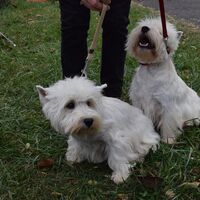 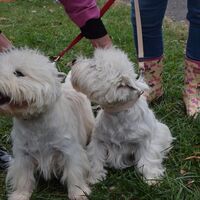 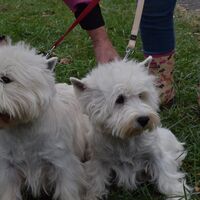 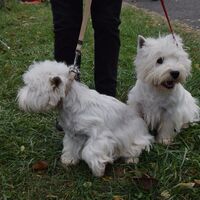 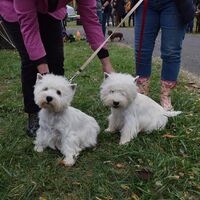 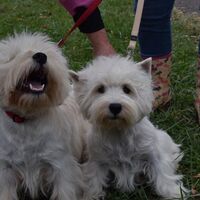 The West Highland White Terrier, or in its more common name, the Westie can trace its origins back to Scottish Highlands to the 16th century. Alongside other Terrier breeds, including the Skye, the Dandie Dinmont, the Scottish, and the Cairn, the Westie was initially also developed in order to tackle the problem of the massive rodent population.

The West Highland White Terrier was used by farmers and Scottish landowners in order to hunt badgers, foxes, weasels, martens, rats, and other types of rodents around the farms. Thanks to their small size, the dogs could fit into burrows and other small places during their pursuit. Moreover, because of their robust physique, they could easily hunt down these animals individually, and also in packs. Some of the landowners intended to perfect their terriers, by breeding the dogs for the most desirable capabilities and behavioral traits, that satisfied the owners’ requirements. The creation of the West Highland White Terrier is attributed to the Clan MacCallum, who was located on the West coast of Scotland. A member of the family, named Edward Donald MacCallum, the 16th Laird of Poltalloch, is considered to be the first original breeder of the breed. At the beginning of the 1800s, he used his own Skye Terrier, and the Poltalloch Terrier, which is presumed to be the precursor of the Westie. According to a family legend, a Laird once accidentally shot one of his darker-coated dogs, because he mistook it for the prey he was chasing. That is the reason why, Edward Donald MacCallum started to breed for a whiter coated breed, so this mistake will never be made again.

In the 17th century, other white-coated terrier breeds were bred in the area, including the Pittenweem Terrier by Dr. Americ Edwin Flaxman, the Roseneath Terrier by the Dukes of Argyll, and the white-colored Aberdeen (Scottish) Terrier from the east coast. Presumably, these breeds also contributed to the development of the Westie, but there are no records backing this theory up. Due to the contribution of these other Terrier breeds, the West Highland White Terrier was known under a lot of names throughout the centuries, like the Poltalloch Terrier and the Roseneath Terrier. By 1896, the West Highland White Terrier was shown in the first Scottish dog show, and the dogs’ popularity became to increase.

The breed became completely established between 1904 and 1909 when it was given the name West Highland White Terrier. The breed gained recognition from the Kennel Club of the United Kingdom in 1907, and from the AKC (American Kennel Club) a year later, in 1908. Nowadays the West Highland White Terrier is a cheerful, intelligent, and fun companion animal and family pet. The breed is also considered to be the most popular among the Terrier breeds.

How old is my West Highland White Terrier in human years?

Sharing is caring.
Help our free service by spreading information about dog breeds.
Link to this: West Highland White Terrier Breed Information
<a href="https://www.dogell.com/en/dog-breed/west-highland-white-terrier">West Highland White Terrier Breed Information</a>
Despite the best intentions, there may be errors. If you find one, please let us know and we will fix it as soon as possible. Contact us here.