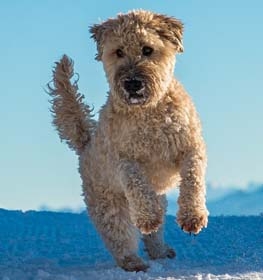 Collection of all the general dog breed info about Soft Coated Wheaten Terrier so you can get to know the breed more.

The origin of the Soft Coated Wheaten Terrier is a bit misty but the breed’s history goes back to over 200 years. With the historical Irish emphasis on oral traditions overwritten one, it is not too surprising that the history of terriers are not that well documented as they were mostly owned by farmers and poorer people. According to researchers, there have been several references found which describe a long-legged terrier with open coat and wheaten color in the areas around Cork and Wicklow in Southern Ireland as well as around Ballymena in Northern Ireland. The intelligent breed’s job was to help the farmers with their hard life, because of this they were often called the “poor man’s dog”, guarding the family, herding sheep, and cattle, and would patrol the boundaries of the small farms to warn off trespassers. Furthermore, the Wheaten Terrier was also used for hunting and was capable of tracking otter and badger, taking them both on land and water. People used to refer to the breed as “the best dog ever for poaching”. This shows that the breed was always a strong, medium-sized dog of great intelligence and versatility.

Moreover, the modern history of the breed is actually closely related to that of Ireland’s two other breeds of long-legged terriers, the Irish and the Kerry Blue Terriers. Native wheaten terriers are believed to be important in the origin of both breeds. Irish terriers were first shown as a distinct class at dog shows in Dublin in the 1870s but the first standard for Irish terriers was not drawn up until 1880. At that time, terriers of the same general size, but with open or soft coats were still often benched with the Irish terriers. Included in these soft coated varieties were dogs with silver, grey, blue and wheaten colors. However, in the early period of the First World War, the Kerry Blue Terrier was separated as a distinct breed and its popularity grew, especially in England. The Wheaten Terrier did not prick the interest of dog fanciers as early as the other two close cousins did. During the World War in the early part of the 20th century, the number of specimens declined and the breed almost went extinct.

However, the turning point of the breed came at a terrier field trial in 1932, where a Wheaten Terrier performed exceptionally well, which caught the interest of a fancier of Kerry Blues, a man called Patrick Blake who was very impressed. He became convinced that the breed should be rescued from extinction so he called upon his friend Dr. G. J. Pierse to start a club for the breed and sponsor it for recognition by the Irish Kennel Club. Eventually, recognition by the Irish Kennel Club was achieved in 1937 and they were first officially presented at an Irish Kennel Club show in Dublin on St. Patrick’s Day.

Furthermore, the first Wheatens to arrive in the United States were brought by Lydia Vogel of Massachusetts in 1947, when she imported a litter of six puppies that were first exhibited at Westminster the following year. Although she successfully showed her dogs in AKC shows, there was not enough interest to receive AKC recognition. It wasn’t until the 1950s that the breed began to grow in popularity when the O’Connor family of Brooklyn imported a dog from Maureen Holmes, one of the most influential Irish breeders. The O’Connors had become interested in the breed after falling in love with the ‘shaggy dog look’ shown in the picture of one of the Vogel dogs. The O’Connor family started showing their dog and became interested in achieving AKC recognition, so they tracked down the descendants of the Vogel pair. In 1962 on the 17th of March the Soft Coated Wheaten Terrier Club of America was formed, even though that at the time there were thought to be less than 30 Wheatens in the country. Overall, as a result of the O’Connors are often credited with the establishment of the breed in the United States. The breed eventually became recognized by the AKC in 1973 when it became the organization's 118th breed.

Sharing is caring.
Help our free service by spreading information about dog breeds.
Link to this: Soft Coated Wheaten Terrier Breed Information
<a href="https://www.dogell.com/en/dog-breed/soft-coated-wheaten-terrier">Soft Coated Wheaten Terrier Breed Information</a>
Despite the best intentions, there may be errors. If you find one, please let us know and we will fix it as soon as possible. Contact us here.