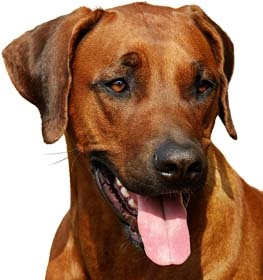 Collection of all the general dog breed info about Rhodesian Ridgeback so you can get to know the breed more.

Rhodesian Ridgeback As a Working Dog

The Rhodesian Ridgeback was once known as the African Lion dog, a hunting dog that was used to track big game animals such as Lions and Cheetahs, hence the name. The breed was developed in South Africa by farmers who needed a versatile hunting dog who could withstand the extreme temperatures and terrain of the bush, survive when water rations were low, protect the property and be a companion to the family. From early in its origins the Ridgeback has been loved for its loyalty, mild temperament, and braveness.

According to historians, the origins of the foundation dogs can be traced back to Ethiopia or Southern Sudan. A drawing had been found in an Egyptian tomb, from 4000 BC, that shows a hound with dropped ears and what appears to be a ridge on its back. Many believe that this was most likely the ancestor of the breed that was domesticated by the indigenous tribes of Africa. Another evidence of the Rhodesian Ridgeback which was found is a rock painting near Rasape in Zimbabwe, that was used for the preparation of the burial of a chief.

Moreover, there are ridged dog breeds that were found in Thailand, Cambodia, and other Asian areas so some people believe that it is impossible to tell if the ridged breeds moved from the East to Africa or the other way around, perhaps they developed totally independently.

Later on, when European Boer settlers arrived in South Africa in the 16-17th centuries, they brought with them such breeds as the Great Danes, Mastiffs, Greyhounds, Pointer, and Bloodhounds among others. They started by crossing the dogs they brought with a half-wild native dog kept by the Khoikhoi (pastoral people) which were the ancestors of the Ridgebacks. These dogs hunted by both sight and scent and were devoted protectors of the entire family. However, at first, the Boers used the dogs to flush partridge or bring down a wounded buck. When big-game hunting became popular, they found that the dogs were well suited for accompanying them when they hunted lions.

Although for more than a hundred years, after 1707, European immigration was closed and the importation of these dogs and also other breeds became hard to come by so their value went up.

Furthermore, when people heard how useful they were for hunting lions, several dogs in the 19th century were taken to Rhodesia. They were so successful, they became popular and their distinctive ridge becoming a trademark of quality. A hunter called Cornelius von Rooyen started a breeding program in Rhodesia (now Zimbabwe). Soon a breed standard was set down at the beginning of the 20th century and in 1924 the Rhodesian Ridgeback was officially accepted by the South African Kennel Union. Some Rhodesian Ridgebacks may have made it to the USA as early as 1911, but it wasn’t until after World War II that large numbers of the breed were imported to the USA, Britain, and Canada. The first one of its type registered by the American Kennel Club was Tchaika of Redhouse, in 1955, the same year the breed was recognized by the club.

Today, the Rhodesian Ridgeback ranks 54th in popularity among the 155 breeds recognized by the AKC. It is quite popular in South Africa where the breed first began its journey.

How old is my Rhodesian Ridgeback in human years?

Sharing is caring.
Help our free service by spreading information about dog breeds.
Link to this: Rhodesian Ridgeback Breed Information
<a href="https://www.dogell.com/en/dog-breed/rhodesian-ridgeback">Rhodesian Ridgeback Breed Information</a>
Despite the best intentions, there may be errors. If you find one, please let us know and we will fix it as soon as possible. Contact us here.