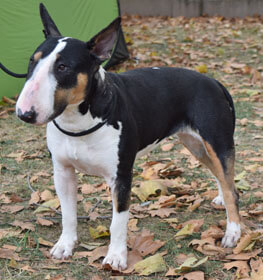 Collection of all the general dog breed info about Bull Terrier so you can get to know the breed more. 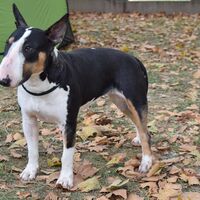 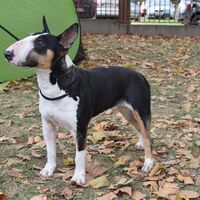 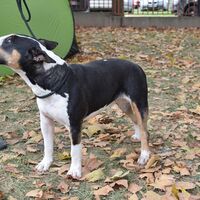 Bull Terrier As a Working Dog

The Bull Terrier came into being by the crossing of a now-extinct white English White Terrier and a Bulldog approximately in 1835. The crossing of these ‘bull and terrier’ dogs and the Dalmatian resulted in the formation of the Bull Terrier. The breeders’ purpose was to create the best, the strongest-boned fighting dog breed since dog fighting was an extremely popular spectacle in the 18th century in England. For fifty years, until the dog-fightings were banned, their ears were fully cut off since they believed that these cannot be injured while fighting.

The systematic breeding of the Bull Terrier began around 1850 and can be associated with the name of a pet dealer James Hinks, who lived in Birmingham. In contrast to the previous approach, primarily he did not consider them as fighting dogs, rather as fashionable companion dogs. From the beginning, Hinks brought his own Bull Terriers to exhibitions since one of his aims was to rear a formally proper dog breed. The nickname of the Bull Terriers was ‘White Cavalier’ because of their courtliness toward people. These brave and fast dogs were also used for grubbing up rats.

The breed gained its popularity through brutal dog-fighting shows in the 18th and 19th centuries. Thanks to these shows, Bull Terriers seemed to be aggressive and snappy with their indefatigable nature. In spite of the belief, bull terriers are rather friendly and obedient dogs. However, in 1835, when dog-fightings were banned, was too late, people believed they are ruthless agonistic dogs.

The first Bull Terrier registered by the American Kennel Club (AKC) was Nellie II in 1885. Two years later the ‘New Bull Terrier’ gained in popularity. In 1897, the Bull Terrier Club of America was formed.

One of the most well-known Bull Terriers was Patsy Ann, who greeted each ship that docked in Juneau, Alaska during the 1930s. Today, her spirit lives on in a bronze statue that was placed on the Juneau wharf in 1992.